Richard Such
The Gaffa

Rolling in with 19 years experience in the sign trade and weighing in at 14.5 stone ringing wet. He is the oldest member of the team and know he's the king of everything...? 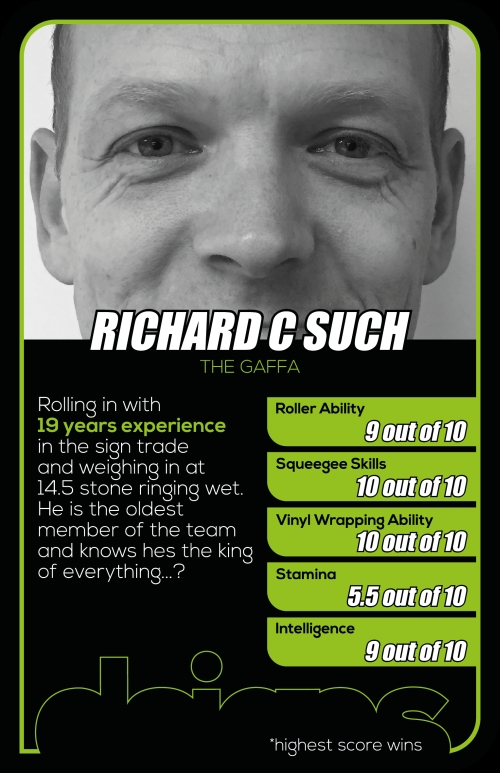 Rolling in with 15 years experience in the sign trade and weighing in at 12 stone after getting caught in the rain. He is the second oldest member of the team and thinks he's the king of everything... but this is still in question... 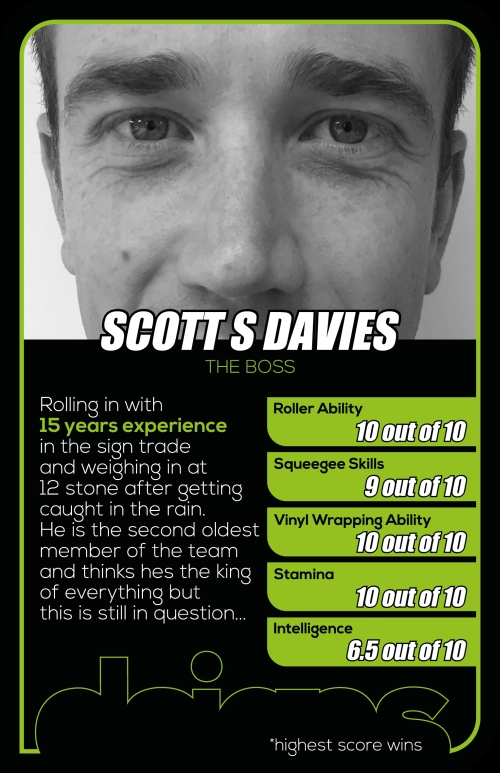 Rolling in with 4.5 years experience in the sign trade and weighing in at 13.5 stone bone dry. He is the newest member of the team and is currently learning the finer sides of vinyl application from the masters... 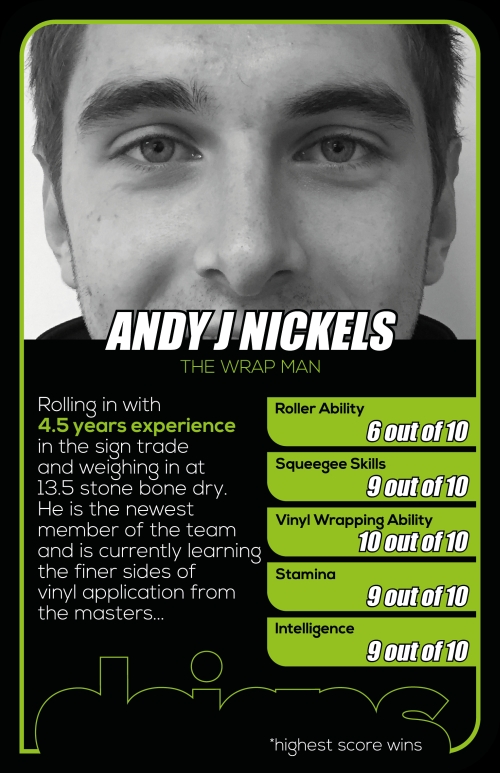 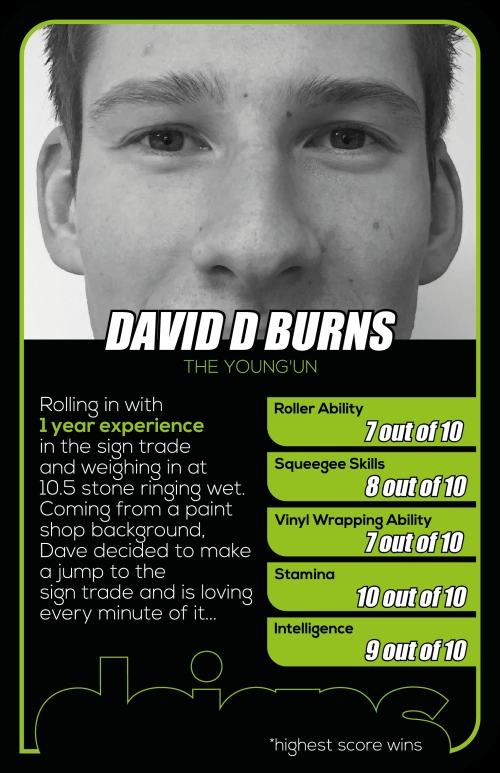 Rolling in with 1 years experience in the sign trade and weighing in at (NEVER ask a lady!), Lauren is in charge of keeping the books cooked and us on the straight and narrow! 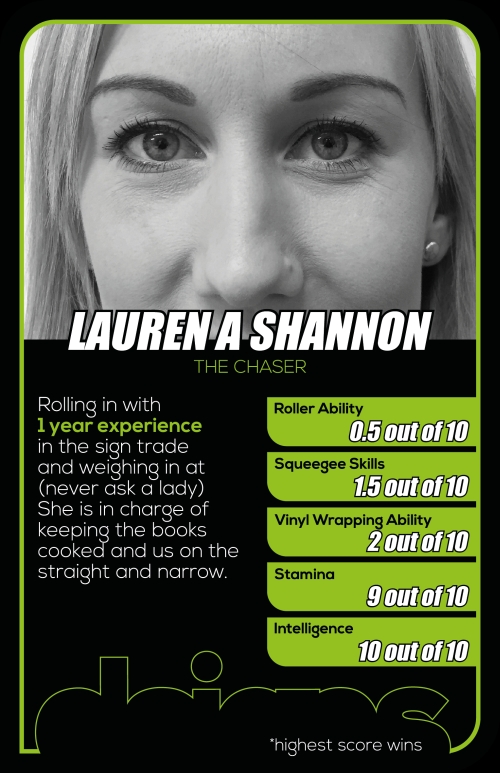 DSigns were established in September 2000 by Richard Such, he had worked in the trade for about 4 years before deciding to take the plunge as it were into self-employment.

The first couple of years were a bit of a struggle as it took time to establish DSigns as a company that had a good reputation for a perfect end result. I’ll always be thankful to my parents as they’re the ones that helped me through periods of the unknown in the early days!! Our first unit was actually ‘borrowing’ a corner of my family friends unit in Heathfield… I will always be grateful to the Trewern’s as the only rent they asked for was a bottle of Talisker whiskey for Terry as he loves a fine Scottish tipple.

We have moved premises a couple of times over the years, from Heathfield down to Bovey Tracey and then in August 2012, we moved back up to Heathfield to a purpose designed unit with a separate print room and vehicle bay. These were exciting times as it was at that point we were really able to expand and push on as we had room to do so!

I had been printing vinyl for a few years for Scott Davies who was working at a sign company in Torquay, he’d been there for about 10 years before he had the opportunity to take over the shop himself and in 2010 the era of Mac and Me was born.

Scott took an already thriving business onto the next stage and quickly earned a reputation for being the place to go in Torquay. DSigns continued to print for Scott and we became good friends. After a couple of years we decided to look into vehicle wrapping as it seemed this was the new rage in the trade and looked as if it was going to be great fun.

In early 2012 we went on a wrapping course together to get some background knowledge on the products and skills required to wrap vehicles.

We spent a lot of time working on our own vehicles before we started wrapping customers vehicles and in September of that year we formed Vinyl Wraps Devon as a partnership. VWD went from strength to strength pretty quickly and we earned through hard work and time a great name in the South West for wrapping.

In 2013 we were lucky enough to be taken to Holland to Avery Dennison’s headquarters near Amsterdam to do their advanced wrapping course…this was on another level and we learnt a massive amount and are so pleased to have been able to go over there and complete the course.

Since that time we have really moved forwards and are looking onwards and upwards.

We now have two full time members of staff, Dave and Andy, we also have Lauren who does one day a week on the accounts side of things.

It’s so different now to when I started way back in 2000 using a corner of someone else’s unit…. We are very proud of how our base of operations look now, please feel free to come over and have a look yourself…. Samples are everywhere and the kettle is always on.

It has been an absolute pleasure working with DSigns. Their enthusiasm and knowledge about the industry and material choices has helped us achieve an outstanding look and finish with our Corten steel signage. The whole process from start to finish has been well communicated and expertly delivered. We are already thinking about other signage we can put in place so that we can work with them again! A great team who love what they do and value their craftsmanship and professionalism. We wouldn’t go anywhere else now and will be highly recommending their services. Thank you to Scott, Rich and the team for all your help and advice.

We have used DSigns on numerous jobs from Building Signage, A Frames, Vehicle Graphics and Full Wraps. Scott and the team not only produce a wonderful product, they come up with innovative & modern designs that really stand out. Their service, from the initial design brief, turnaround time and finished product is excellent. We couldn’t recommend them highly enough.

Our lorries look great, our signage looks great, no matter what we need producing, you guys always deliver!

DSigns have been supplying and fitting our vehicle graphics for over 10 years. As a nationwide company with over 175 vehicles on the fleet across the UK, Plastic Surgeon can be a very demanding customer. Whether it’s asking for a fast turnaround, flexible service or pushing the limits with our one off ad-hoc designs, DSigns always step up to the challenge, and provide a first-class service, delivered with a smile!

Richard at DSigns gave me great design advise on how to present our vans following our rebranding  the new fleet looks really fresh, I have had many people comment on how great the finished vans look

DSigns have been so much more than a ‘vehicle signing’ company for us. They have provided inspirational designs to help us promote our environmental messages across a range of specialist vehicles. The quality of work has always been excellent and their friendly customer service is always appreciated

Richard and Scott are fantastic for our business. We have seen them grow over the years and we’ve developed a fantastic working relationship. They understand our business, our core values and what we want to achieve, which is so important to us. DSigns are an asset to our business. We have recently rebranded and DSigns were at the forefront. They always deliver and exceed our expectations. I could not recommend them enough to small or large businesses. Their experience, expertise and professionalism cannot be beaten.

We have worked closely with DSigns over the past few years and they have always provided us with a very high standard of service and professionalism.

We have worked closely with DSigns over the past few years and they have always provided us with a very high standard of service and professionalism.

Heltor have used DSigns for all its vehicle imagery and creation of promotional literature. We have always found their flexible approach to be beneficial for meeting timescales and offering more than just a typical sign writing company

By continuing to browse or by clicking “Accept Cookies,” you agree to the storing of first- and third-party cookies on your device to enhance site navigation, analyse site usage, and assist in our marketing efforts.Accept CookiesPrivacy Policy